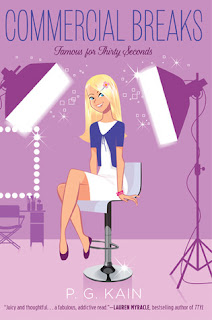 Instead of a typical life attending school and playing sports like most kids her age, thirteen-year-old Brittany has grown up on a steady stream of go-sees, auditions, and callbacks for national commercial spots. Her family's temporary move to Hong Kong put a halt to her acting career, but she's confident that she'll be back in the game as soon as they return to New York. Easy-peasy, right? Well... not exactly. She's about to find out that a lot can change in a year.

I have to confess something: I am a total ham. I used to pretend to do commercials in my childhood bedroom. I would have DEVOURED this book as a twelve-year-old! And I guess I've never really grown out of my fascination with commercials, because I had a great time reading this-- even though I'm well past the age of the target audience. Author P.G. Kain has personal experience in the world of acting for commercials, and has penned a very compelling look at both the glamour and competitive nature of the entertainment industry. Acting may sound alluring, but in reality, it's hard work that can involve a lot of heartache and disappointment.

Besides the appeal of reading about a young person's experience in the acting business, there's a solid story about friendship and self-discovery here, and the main character has a lively, engaging voice. I loved Brittany right off the bat-- she's overconfident, a little judgy, and totally self-absorbed. But she's likable! Her flaws are realistic and relatable (I mean, what thirteen-year-old isn't self-absorbed??), and it's fun to watch her evolve as the story progresses. As she attempts to scheme her way back to the top and knock out the competition, you just know it's all going to end in disaster... but she learns a few things and bounces back in her own way. Plus, there's a cute, well crafted romance, for those who enjoy that sort of thing (AND I DO).

Famous for Thirty Seconds is the first volume in P.G. Kain's "Commercial Breaks" series. This book is a lighthearted, engaging read, perfect for middle grade readers-- especially those who have been bitten by the show biz bug. I look forward to seeing what's in store for the rest of the series! A review copy of this book was generously provided to me by the author.