Right on the heels of the ALA Annual Conference at the end of June, my library hosted a visit with Jodi Picoult and her daughter, Samantha Van Leer to celebrate the release of their co-written young adult novel, Between the Lines. I had the honor of introducing them to an eager audience of hundreds. 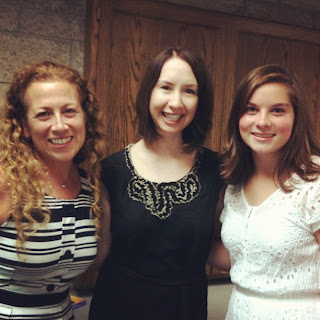 I was so impressed and inspired by Jodi and Samantha! They were both so nice and down-to-earth. I loved hearing about how they collaborated on their writing: Samantha had the idea for Between the Lines one day while she was daydreaming in class. When she pitched it to her mom, Jodi thought they should write it together. Though they had a few differences of opinion (Samantha wanted the prince to be blond, but Jodi won out with black hair), they were remarkably in tune as they wrote.

Samantha noted that her biggest challenge during the writing process was staying focused, and that her mother helped her stay on track. Jodi stated that she really valued the chance to share the writing experience with her daughter, as writing can often be a solitary, isolating activity. She's excited to share the experience of going on the book tour together, too. 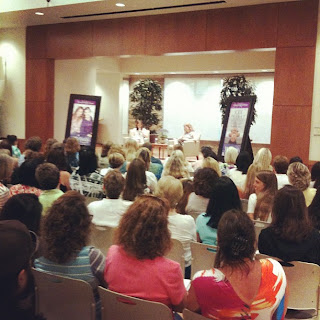 One of my favorite parts of their talk was Jodi's advice for aspiring writers in dealing with writer's block: Just write every day, even if it's garbage. "You can fix garbage. You can't fix a blank page."

Part of the fun of any author event is seeing their devoted fans. I was so charmed by these three girls who showed up in custom t-shirts proclaiming their love for Jodi Picoult! This poster is covered with quotes from Jodi's books-- the girl who made it said these quotes changed her life, and asked Jodi to sign it. How amazing is that? 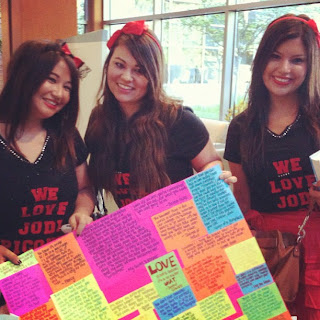 Since this event was held on the release date of Between the Lines, I didn't have a chance to read it beforehand... but after hearing them talk about the book, I am especially looking forward to it.