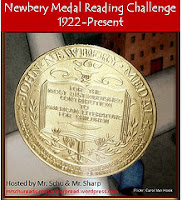 Weighing in with my second pick for the Newbery Medal Reading Challenge, and I have to admit: I am not exactly rocking this challenge. It's a struggle to pick up an old Newbery winner when there are shiny new releases and ARCs that beg to be read. I feel like a student again, poring through the list of titles, thinking, "That one sounds boring.... so does that one... no way... nope..."

But that's part of my motivation for participating in this challenge-- making myself read some of the titles I might not otherwise pick up. I am aiming to increase the depth of Newbery titles I can recommend to young readers at my library... and little by little, I will.

My latest selection for this reading challenge is the 1941 Newbery winner: Call It Courage, by Armstrong Sperry. 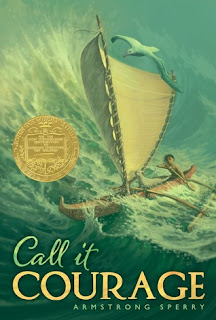 Why did I choose this one? I'm not a huge fan of survival stories, but it has two things going for it:

1. It's available on audiobook.

2. It's set in Polynesia. My husband and I honeymooned in Moorea and Bora Bora ten years ago, so I was eager to revisit that setting.

In Call It Courage, a young boy Mafatu survives a tragic incident in which he and his mother are caught by a hurricane. She doesn't survive, and he is left with a lifelong fear of the sea-- which is not an acceptable phobia for a Polynesian boy to have, considering so much of their daily life revolves around the water. Spurred by the constant taunts of his peers and determined to prove his bravery, Mafatu sets out in a canoe for places unknown and must survive against the elements with only his trusty dog and a friendly albatross for companionship.

If you like survival stories, you'll probably like this one: it's pretty solid. As a bonus, contemporary readers will relate to the bullying Mafatu endures, and his desire to prove himself.

I was curious, however, about how a 1940s novel would depict Polynesian culture. Would there be a lot of nonsense about primitive natives and whatnot? Mostly, the cultural elements come across well enough. The author describes Mafatu and his people respectfully. However, Sperry constantly refers to another (purportedly cannibalistic) tribe as "the black eaters of men." It's plausible that there were cannibalistic tribes in ancient Polynesia, but the emphasis on their skin color is problematic. Sperry hardly ever mentions this tribe's cannibalism without making sure the reader knows they're black, which is awkward and, frankly, disturbing.

But on the plus side, there's a dog in this story, and he doesn't die! I thought for sure he was a goner when he fell in the water near a hungry shark, and his eyes were described as "puzzled" and "so faithful and true" or something along those lines. I was like, "OH NO, HERE WE GO."  ...but the dog survived! Hooray!

The audiobook makes for a pleasant way to approach this book. The narrator, George Guidall, gives a solid performance. He doesn't display much of a range of character voices, but most of the book is narration, rather than dialogue, so his performance works here. (There's also a 2009 recording from Listening Library done by Lou Diamond Phillips that I'd be curious to hear.)

All in all, I'm not in love with this particular Newbery winner, but if I get a request for a Newbery from a young reader who likes action and adventure, I might recommend this one-- but then again, with all the "black eaters of men" stuff, maybe not. It would depend on whether or not the child's parent would be willing to discuss how the language used to describe other cultures or ethnic groups in the 1940s is not necessarily acceptable now. As long as it's used as a teachable moment, I think Call It Courage could work for a contemporary reader.