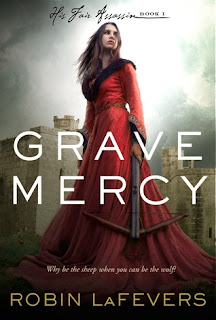 This is the third book I'm reviewing for the 2012 Debut Author Challenge hosted by the Story Siren. 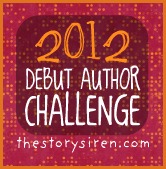 Set in medieval Brittany and layered with inventive supernatural elements, Grave Mercy is an appealing read for fans of historical fantasy. Young Ismae escapes an arranged marriage and finds refuge in a convent dedicated to St. Mortain-- the god of death. Blessed with supernatural powers, she becomes a handmaiden of death, expertly trained in the art of assassination, and is sent on an undercover mission to protect the Breton duchess from those who would betray her. And of course, since Ismae can't just waltz into court, she is accompanied by a handsome nobleman who isn't exactly thrilled to have her along for the ride.

LaFevers offers a tightly-written, suspenseful narrative with believable romance and inventive fantasy elements against a historical backdrop. There's also some unexpected and delightfully dark humor in the midst of political tension; Ismae can be very matter of fact about what she does, sometimes to hilarious effect.

I also enjoyed the thoughtful exploration of women's roles in the Middle Ages; Ismae is driven to serve the god of death not only because she is his daughter, but also because her circumstances in life have been cruel and she has no agency to choose her own path. The reader will root for Ismae on her journey of self-discovery as she learns to claim her power.

This book involves a lot of political intrigue surrounding the protection of the young duchess, Anne, with much hinging on finding Anne a suitable marriage prospect who will help defend the independent state of Brittany from French rule. I found this aspect of the plot fascinating because I read up on Breton history after the first few chapters of the book piqued my interest, so I understood the significance of the duchess and the importance of her marriage for the entire duchy. I'm not sure all the political scheming would come across as quite so interesting to a reader who's unfamiliar with the history of the region, however. Although the history is well incorporated into the story, this book would be enriched by a foreword or author's note.

(Of course, my librarian self says: all the more reason to learn some truly interesting history while you read an awesome book!)

Because Grave Mercy is the first volume in a trilogy, I was expecting a cliffhanger ending, and was pleasantly surprised to find a very satisfying conclusion. The next book will focus on one of the most intriguing secondary characters from this volume, and I'll be looking forward to it!

Grave Mercy is now available in bookstores everywhere. ARC for review provided by Houghton Mifflin Harcourt.
Posted by Allison at 7:00 AM