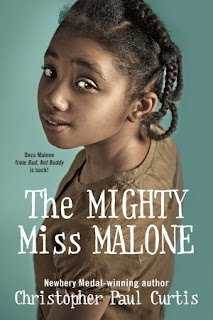 Is it too much to say that Deza Malone is the most memorable young girl in children’s literature since Anne of Green Gables? Would I be going too far to suggest that we just put a gold sticker on this book right now?

I mean, honestly. This book is SO. GOOD.

In this story of a young girl and her family weathering hard times during the Great Depression, Christopher Paul Curtis returns to a character from his Newbery Medal winning title, Bud, Not Buddy.

So, first things first: does this story stand on its own if you haven’t read Bud, Not Buddy?

Well, I have something to confess. I read Bud, Not Buddy several years ago. Like, we're talking library school, pre-kids-- it was a whole different life. And while I remember loving it,  I confess that I did not remember how and where Deza came into Bud's story. Like, at all. I’m so ashamed. But my faulty memory serves you well, dear reader, because I can say with absolute confidence that, YES, you can jump into this one without having read the previous volume.

Having looked it up, I was amused to note that the interaction between Deza and Bud differs significantly  between the two books-- each character tells their own version of their meeting, and I LOVE that Curtis sets them both up as slightly unreliable narrators. That suits the almost "tall tale" tone of these books just perfectly.

So back to the excellence of The Mighty Miss Malone...

I experienced this book on CD, and let me tell you, I cried in the car on the way to work listening to it. Not once, not twice, but THREE times! Seriously, you would think I would have learned after the first time to stop listening on my commute, but I couldn’t help it.

This is a powerful story with exhilarating highs and devastating lows-- I sometimes found myself laughing and crying at the same time. And other times, just crying. In particular, the aftermath of a certain boxing match and what it meant to Deza, her family, and her whole community absolutely wrecked me.

I came to love the characters in this book to the point that they became almost real to me-- as if this weren't historical fiction, but a biography. Deza herself is a delightfully flawed character who changes and grows as she experiences more than her fair share of challenges. The adult characters in the book, especially Deza's mother, are well-rounded and fully developed in their own right. I found myself wanting to know what would become of Deza and her family beyond the scope of this book. Basically, I want Christopher Paul Curtis to write Deza's entire life, because I need to know what happens to her.

And I would want to have Bahni Turpin narrate the whole thing. As wonderful as Curtis' writing already is, her performance as the audiobook narrator really brings this story to life. She has an incredible range, doing a masterful job with women, men, and children's voices alike. Notably, when one character goes through a physical change after an accident, Turpin maintains the recognizable voice she had created for the character, but manages the distinct difference caused by his new circumstances. And her character voice for Deza's "second brain" made me laugh every time. I am floored by Turpin's talent.

I was struck by the way this story begins with "Once upon a time," and ends with a hopeful yet ambiguous ending. The reader is left with a sense of optimism, but there's no easy "happily ever after" here. This is a story about poverty, and though it's historical fiction, the youth of today will relate as we all struggle with the current economy.

The Mighty Miss Malone is already one of my favorite reads of 2012. I want my children to read it when they're older, and I want Christopher Paul Curtis to win a Newbery for it. If he does, I want to be at the banquet to see him speak. And I'll probably cry through the whole thing.