Book Review: A Ball for Daisy, by Chris Raschka 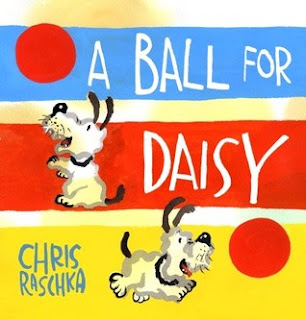 As a teen services librarian, I have to admit I was less tuned into the potential Caldecott contenders than Newbery or Printz, so I didn't register an immediate reaction when A Ball for Daisy was announced as the 2012 Caldecott Medal winner. I knew Chris Raschka's work, but hadn't read his latest.

So when I pulled it off the library shelf, and thought, "A wordless picture book about a dog and her ball? Okay, looks adorable, but..." I have to admit, on first glance, I wondered what made this book stand out above the rest. I was skeptical-- would it have substance?

And then I read it, and I found the substance.

The plot is straightforward: Daisy the dog loves her ball beyond all else... until the day another dog accidentally pops it. But this deceptively simple story grows deeper with each re-reading.

It's a story of a dog and her ball, yes, but it's also a story of loss, acceptance, and healing.

Raschka's thoughtful use of color and bold, unrestrained brush strokes convey a vivid spectrum of emotions, from pure joy to confusion and grief. There is genuine heartbreak in the sequence of drawings where Daisy puzzles through the loss of her beloved ball and finally realizes that it's gone.

According to this NPR article,


The story was inspired by Raschka's son, who had a beloved ball that was destroyed by a dog. "[It happened] when he was 4 ... and it was such a devastation for him," Raschka says. "It's kind of ... the first time he experienced something he loved ending, and that he couldn't get that back."

Raschka depicts so clearly the pain of that first, incomprehensible, irrevocable loss. Happily, Daisy's story is resolved in the end as she learns to love anew, and the reader is left with a sense of satisfaction and relief. And ultimately, it's such a relatable story. Who among us hasn't lost something?

I tested this as a read-aloud with my three-year-old, and it was a big hit with him. We talked about how Daisy felt about her ball, how she felt when she lost her ball, and so on. Not only did my son like the cute doggy and her ball, but reading this book together and supplying our own words for the story presented a valuable opportunity for discussing emotions and identifying how body language can transmit certain feelings.

Reading this book with my son, I felt like hugging him a little tighter. As his mother, I want to spare him the sadness of losing something he loves, but I know can't. It will happen eventually. And when it does, I can take heart from Daisy's story-- how she learns to move on and embrace the next good thing in her life.

I highly recommend A Ball for Daisy. I could read it again and again. Good choice, Caldecott Committee.
Posted by Allison at 7:00 AM